At Westmorland Red Squirrels’ AGM on 25 May 2017 John Martin entertained us with an informative illustrated talk on Pine Martens and their relationship with red and grey squirrels. John described his research on the ecology, lifestyle and breeding habits of pine martens over the past 14 years in Galloway Forest, relating it to other research in Ireland and central Wales.

John’s images and analysis of scats, and what they tell us about pine martens’ diet, were particularly informative, not least in exposing the extent to which martens predate grey or red squirrels. The evidence in Galloway at least, but also apparently emerging in studies in Ireland and mid-Wales, suggests that field voles, small birds, and fruit and nuts make up the majority of their diet, though environment and seasonality are influential. Evidence of red or grey squirrel in scats, in John’s experience, was extremely rare. Here’s a link to John’s presentation>>

A very interesting article making the case for grey control, written by Dr Craig Shuttleworth and published in The Conversation. Read the full article here>>

The Conversation UK is a not-for-profit, registered charity, sharing knowledge from the world’s best universities with a diverse, global audience of readers

If you missed the last episode of BBC Countryfile and you can get iPlayer, you might enjoy the piece on red squirrels showing the trapping and tagging of reds (with no ill effects) in order to ascertain if nest boxes could be erected to mitigate the effects of felling. The whole programme is well worth watching – squirrels come on at 55 minutes into the episode. See: http://www.bbc.co.uk/iplayer/episode/b08lnhfb/countryfile-forests

Work is being stepped up to develop an oral contraceptive specifically for controlling grey squirrels, which are such a threat to our red squirrels. A report in The Independent summarises the next phase of work by the Government’s Animal and Plant Health Agency to develop the vaccine and design grey-only traps. More details here: http://www.independent.co.uk/environment/prince-charles-squirrels-nutella-sterilise-plans-backs-grey-red-a7597481.html . The same story is covered in The Times: http://www.thetimes.co.uk/article/prince-of-wales-backs-mass-sterilisation-of-grey-squirrels-ncgstkh28?shareToken=c3be20f11407765b02ac3e18fed007f3

We’re delighted to announce that we have been awarded a grant of £1000 by Cumbria Community Foundation to pay towards volunteer travel expenses over the next 12 months.  This is most welcome and will help us to provide vital conservation work to protect our red squirrels in South Lakeland.

Our Secretary, Bob Cartwright, is interviewed by the Westmorland Gazette about the Rusland’s Reds project.  Read the article here>> 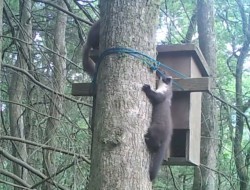 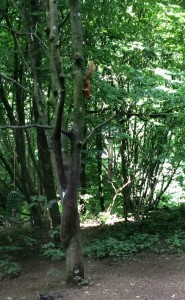 We’re delighted to report that a red squirrel has been spotted at the Lake District National Park’s Visitor Centre at Brockhole – seen near the bird hide by one of the LDNPA’s volunteers. Not only that, but Wendy Carroll has managed to photograph it!

It’s been a long-held ambition of Westmorland Red Squirrels to see red squirrels back at Brockhole, and thanks to the hard work of our volunteers and the help and cooperation of LDPNA staff at Brockhole we now have the first recorded red sighting for many, many years. Well done, everyone!

If you see a red squirrel at Brockhole or anywhere else, please report it using our online form>>

Would you like to play a vital role in an ambitious scheme to revive traditional skills and restore the unique wooded landscape of a wonderful part of South Lakeland? Following a successful, community-led bid to the Heritage Lottery Fund, the Lake District National Park Authority, on behalf of the Rusland Valley & Fells Landscape Partnership, is now looking to recruit six apprentices to help deliver the Rusland Horizons Scheme. If that’s you, or you know someone that might fit the bill, read on>>