How can we create conditions for red squirrels to survive? Is there anything we can do even if we no longer have reds in our area? Bob Bradley’s paper below explains the threats presented by grey squirrels but offers an optimistic view that we can tip the balance by installing red squirrel-only nest boxes and by planting the right kind of trees.

Bob sadly passed away in March 2018. He was a veterinary surgeon of more than 40 years’ experience and with a lifelong interest in red squirrels. He rescued and then released them back to the wild and also successfully bred them in captivity before release. Bob was a long-serving member of Westmorland Red Squirrels and lived in south Cumbria. He is very much missed for his wisdom and experience.

You can download a PDF version of Bob’s paper here>>

THE WAR OF THE SQUIRRELS

A personal view of the competition between the Red and the Grey Squirrel in 2015, updated January 2016

This article has been produced to draw attention to ways in which we can contribute in favour of the Red Squirrel in its struggle with the introduced foreign Grey.  In particular, supporters of the Red can still understand the situation and can still contribute to the preparation for the return of the Reds into your areas, even if at present your locality has only the Grey or even no squirrels at all.

I feel that we are at a stage in the battle in Cumbria where some sort of a review of the current situation may be useful.

Continued persecution of the grey is essential.  We have shown that some improvement in the breeding performance and in the distribution of reds has occurred in spite of some greys still being present at diminished levels.  What should we now be doing to consolidate and improve the current position?

We cannot expect much help from the scientific fraternity because of the difficulties of working in the wild environment with elusive animals and a complicated virus disease as well.  However, we can make intelligent suppositions based on strong and steadily increasing circumstantial evidence about lots of unproven hypotheses.  We must now be using what we ‘know’ to extend and join up the populations of reds that we have.

Our two competing squirrel species have developed separately for thousands of years on opposite sides of the Atlantic Ocean and it is not surprising that there are important differences between them.

The grey squirrel is adapted to the conditions of deciduous forest of the eastern part of the U.S.A.  These forests consist primarily of 4 species of oak tree, the hickory and the walnut, all of which produce large fruit and are fairly reliable year to year.  The trees flower in the spring and the fruits ripen on the tree until the autumn when they fall to the ground.  All stages are squirrel’s primary source of food.  Fruits are also stored for winter, primarily in tree holes (as our red stores hazel nuts in the ground).

All parts of these trees, including the flowers and fruit, contain large concentrations of Tannin, a bitter and sometimes poisonous substance. No one is sure whether tannin is developed accidentally by the trees or if the tannin production has been developed as a kind of protection against animals eating its leaves and fruit.  However it came about, the grey squirrel has become immune to this poisonous character and acorns together with similar fruit provide the predominant food of grey squirrels for well over half the year.

In the USA in the spring the acorns have gone and the greys have a change of diet.  They now resort to the barking of trees to obtain the nutritious sap which is liberated.  They also become considerable predators of the eggs and young of birds. (As the greys in the UK do now).

Our red squirrel in contrast, originated and developed in conifer woodlands and has only recently been forced to live in mixed woodland.  The red have not had time (in evolutionary terms) to become tolerant to tannin and cannot therefore use acorns as a food source.  Unripe hazel nuts also contain tannin and are eaten by greys before they become available to the reds. The red squirrel, although originally a specialist on the scots pine, over the ages, has been forced by climate and man, to become a specialist of tree seeds in general excepting the oaks. The main trees important to the red are the hazel, larch, elm and yew, in addition to the scots pine.

All these trees take years to mature from seedlings before they will fruit and so we should bear this in mind and should be encouraging strategic planting now to have mature trees for the recovery of the red squirrel in the future.

In addition, our reds have never, until the arrival of the greys, had a competing squirrel at all.  The grey is larger, heavier, more predatory and accustomed to raiding structures in the treetops looking for food and shelter.

In view of all this, artificial feeding of the reds where under pressure can be a very valuable factor – see Appendix for method.

(Allow for much overlapping)

A glut of the acorn crop allows the greys to build up their numbers dramatically in the winter.  As this food supply becomes exhausted in the spring, the territorial behaviour of the greys becomes more influential and the less dominant animals are driven out of the core territories.  This produces a roving hungry incursion usually of younger adults, into the surrounding areas. Such animals are known to travel big distances. (2 to 3 kilometres in a day have been recorded).  These animals constitute a considerable threat to red squirrels living in such areas.  We can envisage what such animals would do when looking for food and shelter in an area strange to them, confronted perhaps by night fall or deteriorating weather and finding a drey containing a nursing red squirrel with young.  Remember how we suddenly saw no more juvenile reds when greys first arrived with us!

How good do you think a red squirrel might be at defending itself when inside a drey?  Until the arrival of the grey, they have never had much necessity to develop and practice such defence. In fact there is one behaviour trait which might discourage an aggressive response to any threat.  I call this the “sanctuary effect”.  During observations of my captive red squirrels, I kept an observation camera inside the top of a well-used nest box.  Often the box contained 3 or 4 squirrels inside in a heap.  At no time did I ever witness any aggression and the occupants spent their time sleeping or grooming themselves and each other.  However, two of these squirrels did not get on with each other when outside in the big cage.  One would not allow another particular squirrel within a distance of about a metre without driving it away.  Inside the two were quite at ease together!

Imagine an emergency where a red is threatened or being chased by a predator (eg. Pine Marten or Goshawk).  The threatened squirrel has only one safe retreat – a drey.  It would be a ridiculous behaviour trait if access to a drey was prevented by an occupying squirrel, resulting in the death or injury to the fleeing squirrel.

I am not aware of this behaviour involving the sanctuary of the drey being reported in the literature. 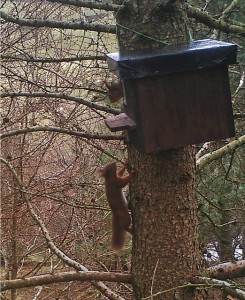 A wooden nestbox in use

My answer to all the above is that we should try to limit the contact areas.  Feeding hoppers and artificial nestboxes should be made unavailable to greys. Boxes and feeders protected by a circular 48mm hole in a metal plate will exclude adult grey squirrels and prevent them using the facility and prevent contamination with virus. See Appendix for designs. Metal birdfeeders which could cause injury to the face of a red should be avoided.  Flea powder can be sprinkled in nest boxes occasionally. Heavy external parasite infestation will cause excessive scratching and sharp claws could then cause the skin injuries.  (Is this why we see SPV lesions on the ears of infected animals?). 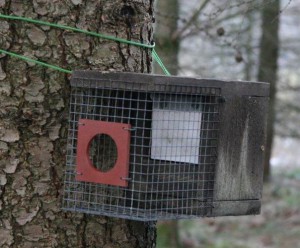 A wooden Red Squirrel only feeder

The boxes and feeders I use are not ideal I know.  They are clumsy, time-consuming to make and somewhat expensive.  They also do not last more than a few years – but they do what they are intended to do.

SUGGESTION FOR A RED SQUIRREL ONLY NESTBOX

Make a hole in one of these sheets about 2 inches down and 2 ½ inches in from the edge exactly 48mm in diameter. Protect from enlargement by a ring of Perspex or aluminium (non-scratch).

Fit the bottom shelf in front of the hole: size not critical, but not more than 5 inches below the hole.

A batten screwed vertical on the back of the box makes for stability and allows the lid to be removed. Plus 2 sturdy screw hooks for hanging.

Lid – inside one 16th of an inch clear of body: overhang if you wish.

Hang from tree about 10 to 12 feet up using plastic-coated clothesline – the kind with a central steel core is ideal.

Suggested knot is a double “grinner” as shown with two loops.

Hang the nestbox from one of the loops only – so that then the other grips the tree.

Nestbox hole should be near the trunk.

SUGGESTION FOR A RED SQUIRREL ONLY FEEDER

A wooden hopper containing the food attached to an antechamber with entry restricted by 48mm diameter hole (prevents access by Grey Squirrel) and a Perspex flap (prevents theft by small birds).

The antechamber is made from ¾ inch or 1 inch weld mesh. Its floor is also wire so that debris and squirrel faeces can fall away.

The back of the feed hopper can be made detachable or the food may be replenished via the entrance hole with the feeder temporarily detached from its tree.

Fit about head height for easy access. 2 staples fixed to the box as shown can be made to correspond with 2 hooks on the tree.

Late spring and early summer are the most important times of year for red squirrel feeding.