Habitat loss is also of increasing concern now that we are losing trees to disease, rather than to planned forestry operations. Here in south Cumbria, Larch plantations have provided both habitat and food for red squirrels, but now these trees are being felled in great numbers because Larch disease (Phytophthora ramorum) has been detected.  Even if these areas are replanted with red-squirrel-friendly alternative species of trees, it is going to take many years before they can provide the equivalent in food and shelter to the Larch they have replaced. 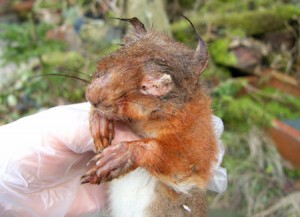